We had family in from out-of-town last weekend. Texas was having gorgeous weather, so we all opted to take a wander over to the Stockyards in Fort Worth. I’d recommend this to anyone for a slice of Americana that has been nicely preserved. It does slew slightly over to touristy, but in so doing, allows you to get a cup of bougie locally roasted coffee and sit on the sidewalk outside of a hundred-year-old building with original wood floors and watch the world go by.

I’ve missed the simple act of being out and seeing people over the past couple of years. Not necessarily interacting but enjoying the diversity of a crowd.

This was a decidedly diverse crowd. 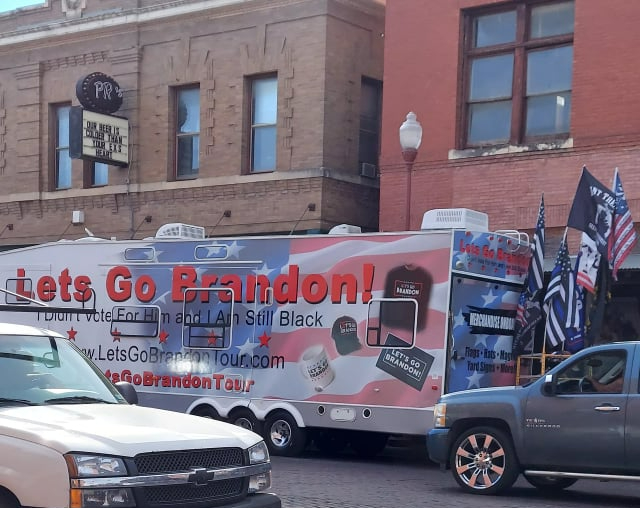 The Stockyards has a rodeo arena built in 1907 as well as a few long blocks of restaurants, attractions, and western-wear shops that connect to the vast areas where the drovers used to park their cattle on the long journey up from lower Texas up to the railhead in Kansas on the Chisholm trail. Back in the day, this place was the last “civilized” outpost on the trail, a place to get a real bed, a real bath, and a real good time with the women-folk.

Between the 1880s and the 1950s, the Stockyards grew to become the largest livestock-trading center in the Southwest. It was the place to get your horses and mules during the First World War, with Allied military officers from all over the world purchasing their animals there for the war effort. It became so prosperous they dubbed it “The Wall Street of the West.” It thrived all the way up into the 1950s, so the place had a good run.

It’s thriving again due to some infrastructure investments. Just like days of yore, when cowboy culture and commerce intersected, the place attracts all kinds, from packs of Harley riders to Hasidic Jewish kids on a sightseeing tour, to Trump touters to 70s-era hippies, and of course cowboys. There was a stock show in town, so there were plenty of authentic folks wearing broken in boots and big belt buckles they’d earned being the best at something on the Rodeo circuit.

There’s a mix of shopping; high-end stores in mule alley and at the far end, a whole indoor section of smaller stores that are priced a little less. You can get new dinnerware if you’d like.

For authentic boots and belts, go to Leddy’s on the corner of Exchange and Main.

Highlights of our stroll down this historic street included visiting the statue of this Bulldogger fella, Bill Pickett, who figured out if he leapt from his horse and caught a steer by the horns, twisted the steer’s neck around and bit its lip, he could bring it down in record time.

If someone did that to me, I’d fall over too.

He interestingly did not die doing this, instead meeting his end being kicked in the head by a horse. They didn’t mention if he was trying to bite it at the time. In 1972, Pickett became the first black cowboy to be inducted into the National Cowboy Hall of Fame. Lisa Perry is the sculptress who created this wonderful bronze 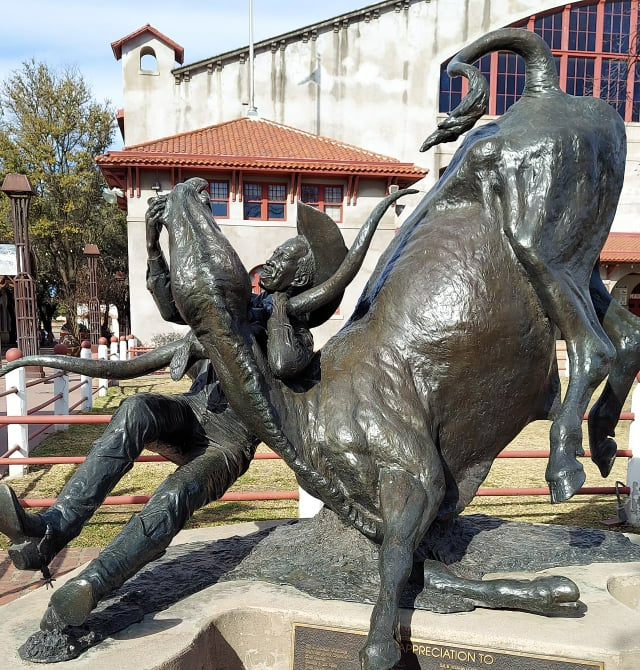 The other highlight, besides plain old people watching and admiring the architecture of the old buildings, is the Longhorn herd. We’ve seen the cattle drive down the street before, but it’s always fun and worth it to do it again. We also trotted over to the pens to see them at leisure, drinking water, and enjoying the sun. There are sixteen of them, and what we noticed this time is that all of their horns grew in unique ways. They were quite graceful moving around each other and things. The man who owned them said that on long drives, the cattle get up behind slower brethren and nestle a horn behind their backside to help push them along. I will say they move at a good clip on the “drive” down the street and seem to enjoy the walk.

We capped off our day in Fort Worth at the charming Bearded Lady for drinks and nibbles. They allow dogs on the outside patio and have heat lamps for chilly evenings. Nice, diverse music plays and the waiters are the perfect mix of laid back and attentive. Get the fried pickles and roasted Brussels sprouts. Your mouth will be happy that you did.