I had a few comments last week that the theatre jargon I toss around sounds… odd to my non-theatre friends and readers. I’m forced to agree. The terms for things in the theatre can sound like we live in an opposite world. Like to “strike” means to work really hard to tear down the set, not to refuse to go to work. To “block” something means learning how to move on the stage in a specific way, not to be an immovable lump preventing forward movement.

Tech week, or hell week as many dub it, falls closer to being what it sounds like. It’s the time when the lighting designer, sound designer, and props designer move to the front of the line in terms of priority. Hopefully, your set is already done, although usually it is not. I’ve been in many productions when the last bits of paint are still wet when the curtain goes up. (And yes, these days there are rarely actual curtains going up – it is more of a move of lights going down on the house (the audience) and then to a blue or black-out and then the lights up on the first moments of the play.)

Those lights are hung, gelled (colored film that changes the colors of the lights), focused, and refocused during tech week, and gosh I hope you like heights. If you are in a fancy theatre, much of this is done via computer and you get the fun LED lights that you can program to change colors. If you work in community theatre, someone’s going up on a very tall ladder to wrench things around so that the stage is lit properly. Sometimes there’s a big grid that floats way up above the stage, and you walk around on that to fix the lights. Lighting techs are among the bravest people I know.

The mp3 sounds and incidental music are programmed into the cues (not pool sticks, but alerts that a new sound or light change is about to happen, or someone’s line (not an actual drawn line, but a string of words you’d say… a sentence to anyone not in theatre)). Then the person running the board (not like a board of directors, but an actual board that is in most theatres programmed, but still needs a human hand to make sure things happen in the correct sequence) needs to find the flow. In my current production, I have scenes that float between various locations on the stage, and we use sound and light to direct the audience’s attention to the correct spots. It would be jarring if those transitions were sudden. The design will reflect the flow, and the board operator makes sure it happens on time and that way every performance.

As ladders are climbed, holes drilled for cords, and the music stops and starts, the props people are decorating the set and building odd things that are in the script. 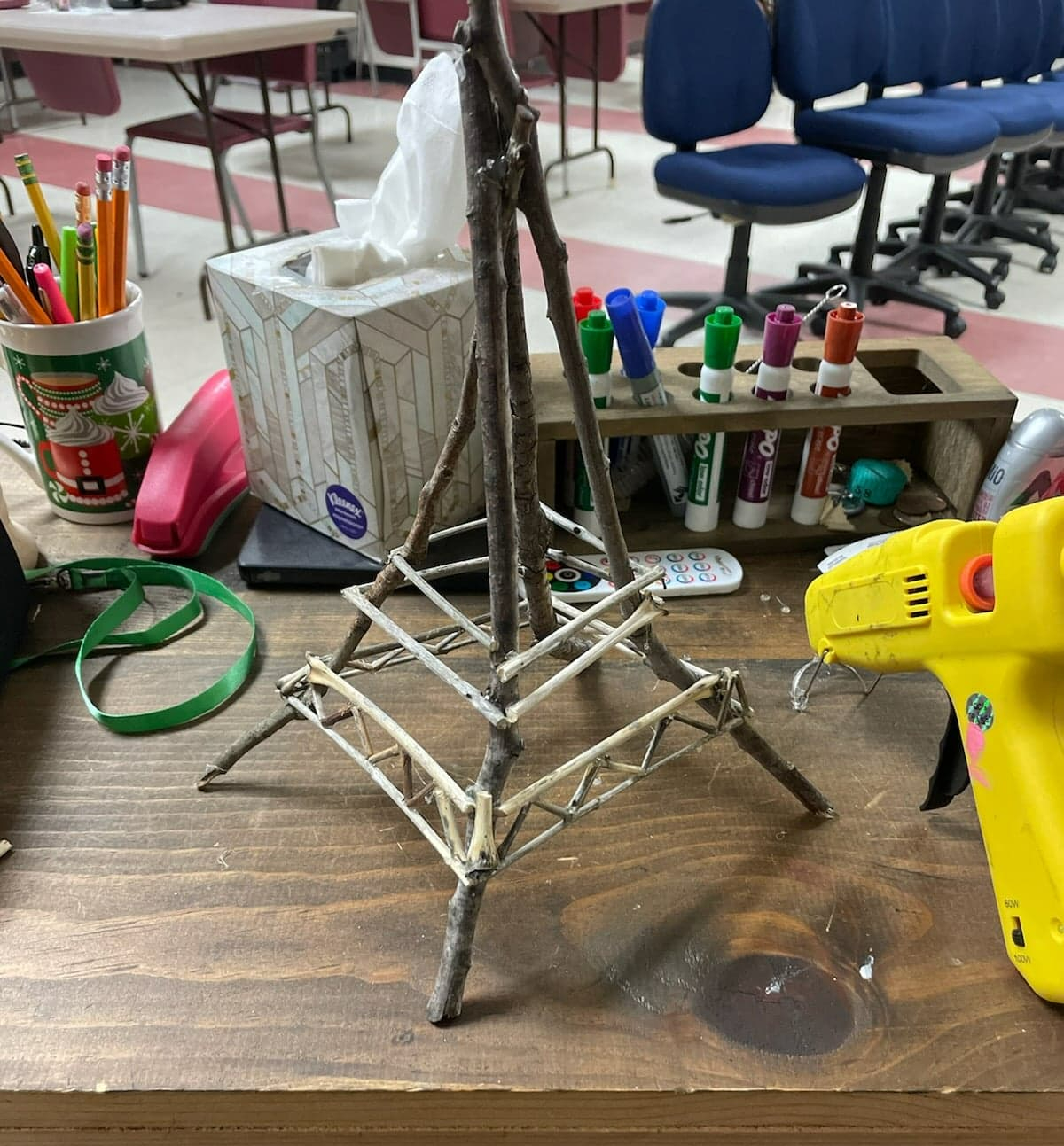 In my current play, a stick model of the Eiffel Tower is called for. Writers, you just can’t trust ‘em… wait, I wrote it…. The play I am directing right now* also has a lot of food in it, so the props people cook that each night. Biscuits, green bean casserole with potato chips on top, chicken and gravy, apple crisp… all prepped and then the dishes washed afterwards. The cast tells me it is all delicious, so score one for our props team.

All of the above is going on while at the same time, backstage cords are being taped over so no one trips, special blue lights hung backstage so actors can see while dashing from place to place and changing costumes in a blackout (when all the stage lights go off, signaling a change in location or time or that it is intermission.) Prop tables are set up, as well as baskets on either side of the stage so that the actors can grab their hand-held props with ease, and the prop folks can set them back later.

The costumer is in on this we-open-in-less-than-five-days action too, as the clothing the actors wear gets pinned, hemmed, and switched out for different choices. They make sure the actors can move in the costumes, and that there is nothing that can get snagged during an argument or a fight sequence. (The fight choreographer has been in long before this point, but sometimes they come back for a visit to make sure the actors are doing all their moves safely.)

The production photographer will come in at some point in this process as well, and you just make space for them to get the snaps that will (hopefully) go into the posts, articles, and reviews of the show that have been set up.

There is an entire many-hours-long rehearsal devoted to just tech, with lots of starts and stops as all the moving pieces start to come together. At this point, there are maybe four or five more rehearsals before the show goes in front of actual paying people. If you have a good director, there is very little yelling in this phase and they or the producers will hopefully feed everyone a nice meal and have snacks and water available. If you have a bad director, or if the show is woefully under-rehearsed, tech week can, indeed, be a hellish experience with lots of yelling and perhaps the tearing of hair and rending of garments. In either case, it is at least two eight to twelve-hour days in a row and a lot of getting home at midnight or later the next few days after that. You learn to take your vitamin C and that sugar and caffeine are your friends.

Yet, at the end of it, in spite of all the last minute jammed-in corrections, awkward fixes and jury-rigging… you have a beautiful, magical, ephemeral show. Like a duck or a swan, there may be an awful lot of paddling going on underneath the water at this point, but for the audience… magic.

The photos in this week’s blog are by Steven A. Bracey. This last pic is my pic of him taking a pic… He was our production photographer.

*Like Kissing Moonlight at the Mesquite Arts Theatre in Texas. Come see the show if you can, runs June 10-26th on the weekends. Tickets: https://mesquiteartstheatre.org/tickets