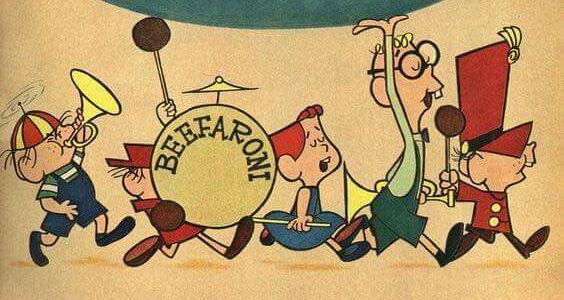 We gather at my parent’s home these days, bringing the food in to them. They are both quite elderly, and their cooking skills/inclination to use the stove have declined along with their health. I can see vestiges of this starting for myself already. After years of shopping lists, menu planning and cooking meat/veg/starch meals for a family of five, I’m more apt to just bake a potato. Or open a can of soup.

I’m partial to both tomato and chicken noodle soups from Campbells. I used to love Chicken and Stars, but the stars are too small now, and it’s often hard to find. Yes, I enjoy making my own soup, especially in the fall and winter, but sometimes it’s just nice to open a can. They even have those pop-top ones now, as if the soup was masquerading as a can of soda.

My fondness for Campbells stems from the hot lunches mom would give me when I walked home for lunch during grade school back a million years ago. She wasn’t much of a cook back then. I got meals from a can often. If my parents went out to dinner, they’d give me Chef Boy-Ar-Dee Ravioli or Beefaroni. On especially special evenings, it would be Ravioli-o’s or even Dinty Moore beef stew. 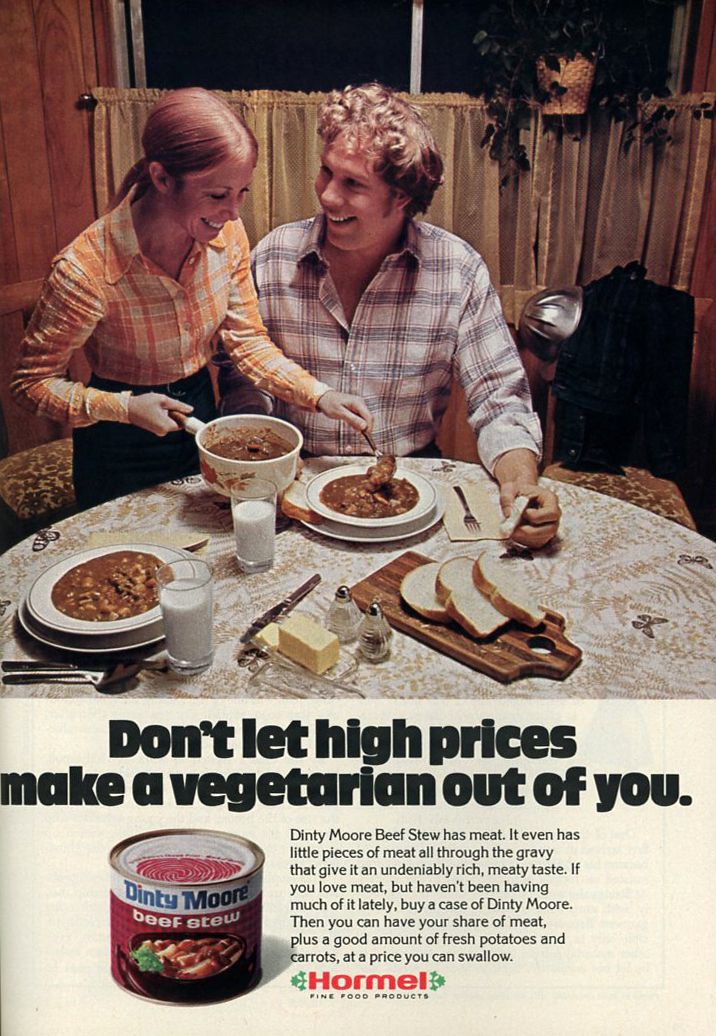 I didn’t mind, really. It was clear, even at a young age, that cooking wasn’t on my mom’s list of things she enjoyed. She’d been an ice skater with Holiday on Ice, and toured the world, so ate everything out of a can heated over a hotplate herself. We often ate the same dinner four or five times a week when I grew up as she marched through the freezer. Dad would regularly buy a quarter of a cow from the 4H club, so I grew up eating beef, beef, and more beef. Salad with oil and vinegar dressing, rice or potatoes, and the meat.

Dad would cook dinner sometimes on the weekend. He came from his mother’s style of cooking which was to toss meat into a big cast-iron skillet with a chunk of the lard they kept on the back of the stove in an old coffee can and fry it until it was black and “done.” Everything else was boiled to death, or from a jar in the cellar that’d been put up the summer before. Corn, peas, beans. But at the end of the meal, there was always pie or cake or sometimes hand-cranked ice cream. No wonder he grew up loving sweets and bakeries.

I’ve inherited those loves, along with my grandmother’s knack for baking.

I also admit to tossing things in a big pan and cooking them, but there are more vegetables involved. Usually.

This past Sunday was a celebration of some good work news for one of our number, and a farewell to two others. Our younger son and his girlfriend are moving to Washington, DC in mid-May, but there are lots of things in between, so Sunday lunch was really the only space they had to let my parents know what was happening.

Dementia is slowly wending its way through both of them, so we’ve found its best to keep things as status quo as long as we can before telling them anything is going to change in their world.

Then we tell them again as often as we need to. It’s just the way of things now.

So, we all brought the food in, a brunch of eggs and bacon and fruit and croissants and coffee. We bring our coffee pot over along with beans and a grinder because dad hates coffee. “Vile black boiled water,” he’ll say. He gives a guttural ugh sound to go with it every time. Mom, again going back to being on the road for years, likes instant coffee best. Two spoonfuls in a cup, and then hot water from the tap is her start of every day.

It’s kind of nice and easy, really. Everyone brings something and we clean up after. The folks are good for about two hours of people and conversation, but then they are worn out, and it’s time for us to go.

This past Sunday we continued our time with the boys and their gals after the meal at my parent’s house at the farmer’s market here in Dallas. It was cool and breezy and threatening rain. We didn’t care; we had a nice time wandering and looking and talking to people with dogs. We miss our dog. Sat inside and had a beverage and talked some more.

I’ll miss our son and his girlfriend when they go, and I’m not-so-secretly jealous of their move to DC, but I know we’ll continue to have meals together as we can. We’ll cook for them for a long time to come. Feeding people is our love language. But we promise to keep what comes out of cans to a minimum. 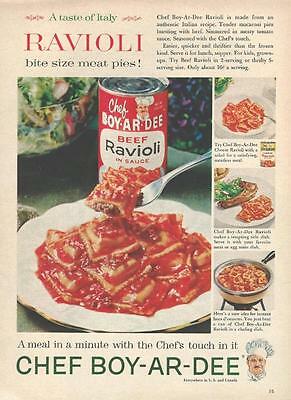