I’ve found in chatting with people about my trip that not many folks have been to Crete. They’ve been to Greece, on the mainland in Athens or on other islands such as Santorini. The first thing to know about Crete is that it’s big. It has a wide variety of terrain, including huge mountains that cut through the middle of it. I’m not talking oh, lovely little rolling hills that are above sea level that one can scramble up. NO. The mountains on Crete are enormous rocky things and are so high they have snow on them for several months of the year. The only things that can scramble up them are the Kri Kri, the local little goats.

It also was an independent country for a long time, only formally joining the group of islands we call modern-day Greece 100 years ago. It played a huge role in WW2 that I’m mortified to admit I knew nothing about, and I’ll fill you in about that in another outing of this blog.

I’d always wanted to come to Crete because I read “The Iliad” and “The Odyssey” when I was in fourth grade, and fell in love with Greek myths. When the chance arose to come to the place that ignited my storytelling fire, I was all in. So, as I unleash all these gorgeous pictures, please know that nothing, not one moment of the trip, was lost on me. I was grateful with nearly every step I took on its ancient roads and byways. (Except the fifteen minutes when we couldn’t get into our rental house, I’ll tell you about that in a later blog.)

For the week-long expedition that I planned that would occur before the swimtrek week of the trip, myself and three companions would spend two nights in Chania, two in Iraklion, one in Rethymno, and a final night on the south side of the island in Chora Sfakia before nabbing the ferry to take to our swim location.

I put us in the “old towns” of each of these. Now I know “old town” can be a relative term. I lived in Chicago’s “Old Town” for a while, it wasn’t very old. Here on Crete, it means a different thing. It means a spot that looked like a good place to put a town three thousand years ago, or, in the case of Chora Sfakia, 6.5 million years ago (not a typo.)

The streets in Chania’s old town are narrow and winding, and all paths, of course, lead to the stunning harbor. 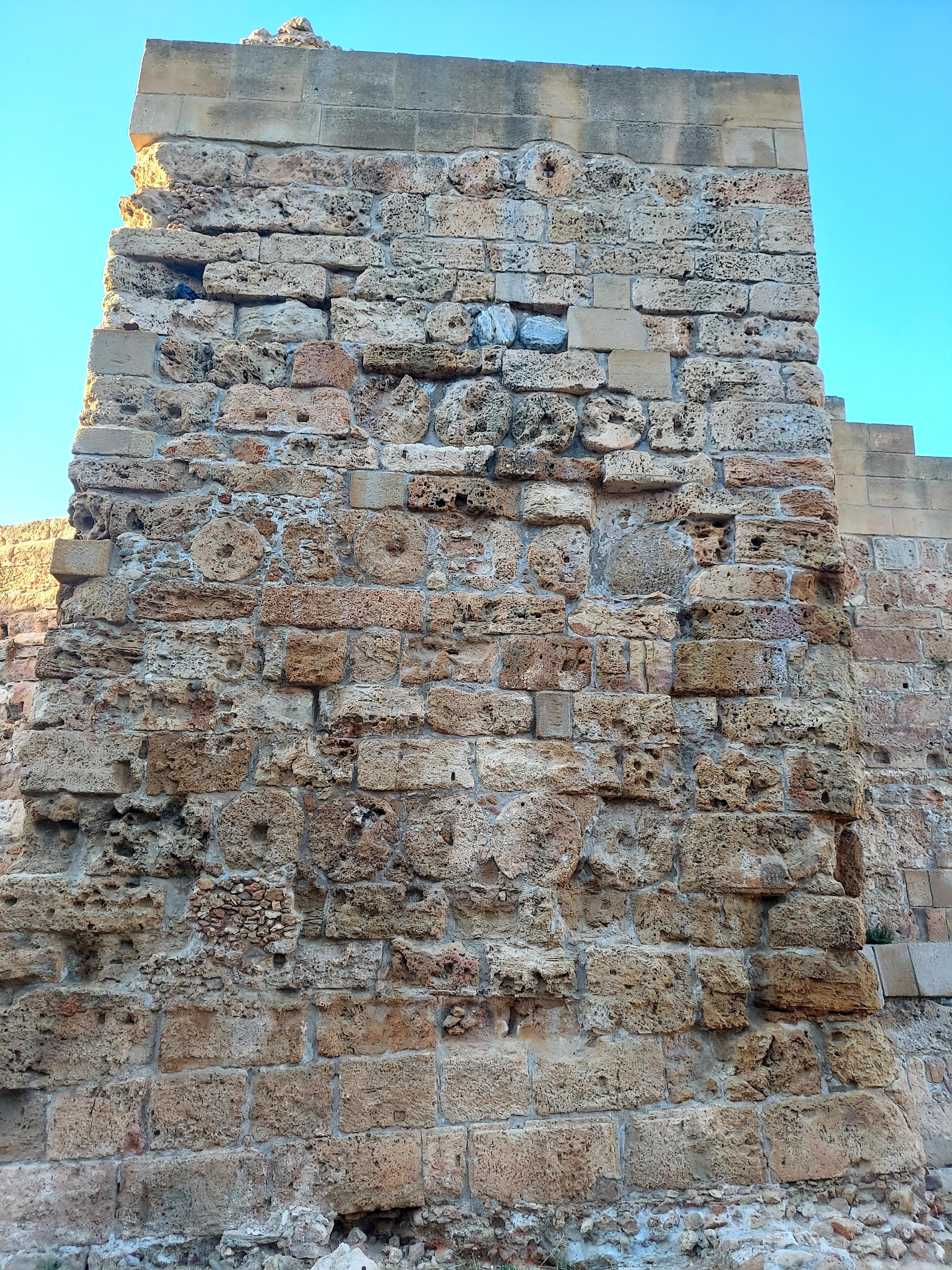 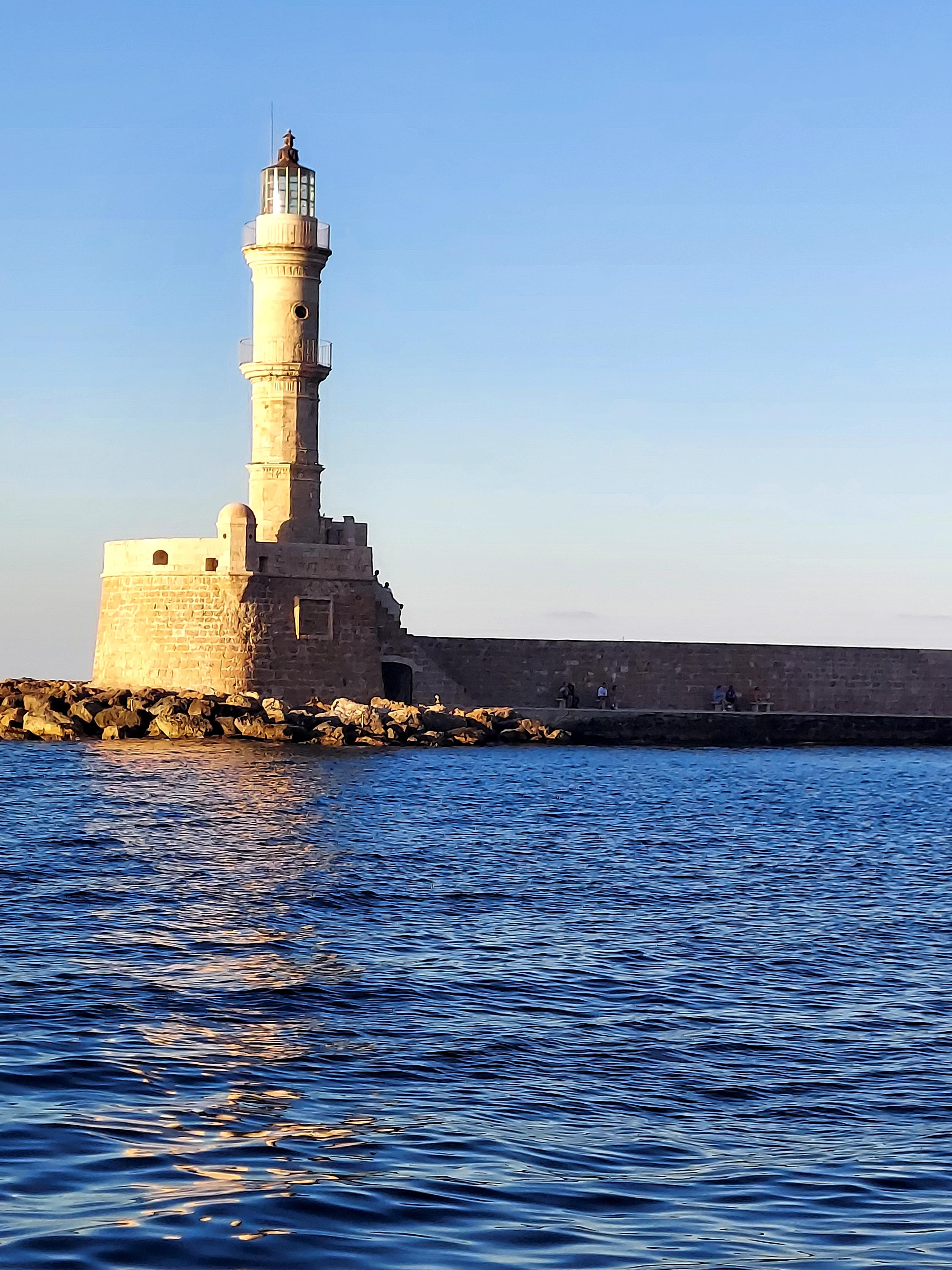 The Venetians placed the big blocks of stone that comprise most of the harbor area along with long walls to protect the city some 500+ years ago. After the Ottomans overran the place and destroyed a lot of it out of spite, the Egyptians rebuilt it. I discovered on this trip that the Venetians were busy builders, and that there are ruins all over the island. It makes sense, as Crete is smack in the middle of some excellent trade routes. The island is located in the shipping lanes between Africa, Egypt, both the middle east, the far east, and Europe, it was the place to hang your shingle if you were into goods and trading.

The old town got bombed heavily during WW2, which ended up unearthing some of the oldest living places ever found in the Mediterranean. Cities built upon cities. Silver lining, I suppose. These are tombs that were in an 800-year-old Christian church. Then the Ottomans came, turned it into a mosque and got rid of the bodies. Now it’s a shop in old town Chania. Above this floor in the domed ceiling hang some of the original chandeliers from the mosque. 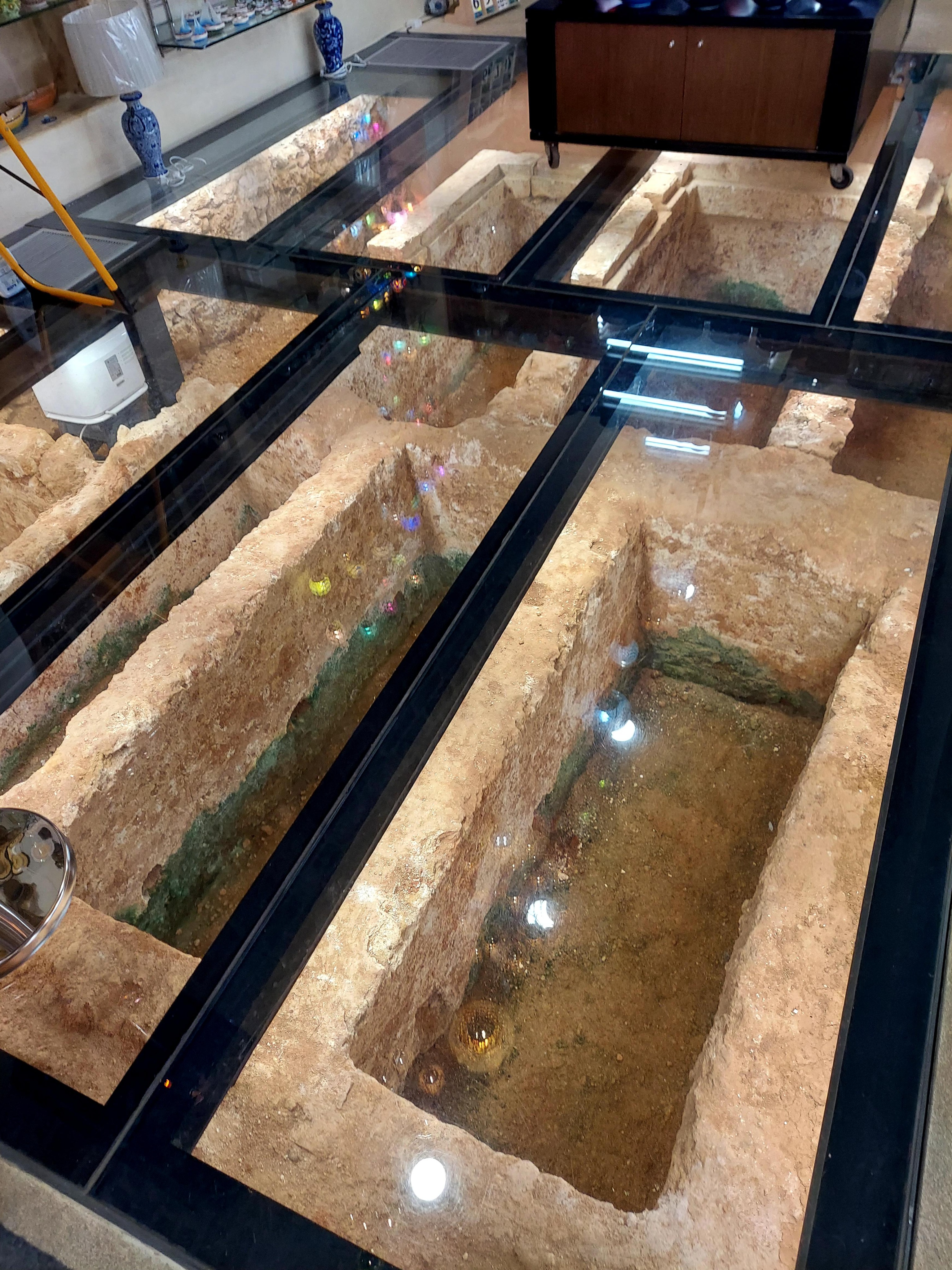 It’s like stepping back in time as you stroll through the alleyways. No cars, just pedestrians. There are shops everywhere selling crafts and clothes, as well as restaurants with outdoor seating inviting you to come and have a nice, leisurely meal. 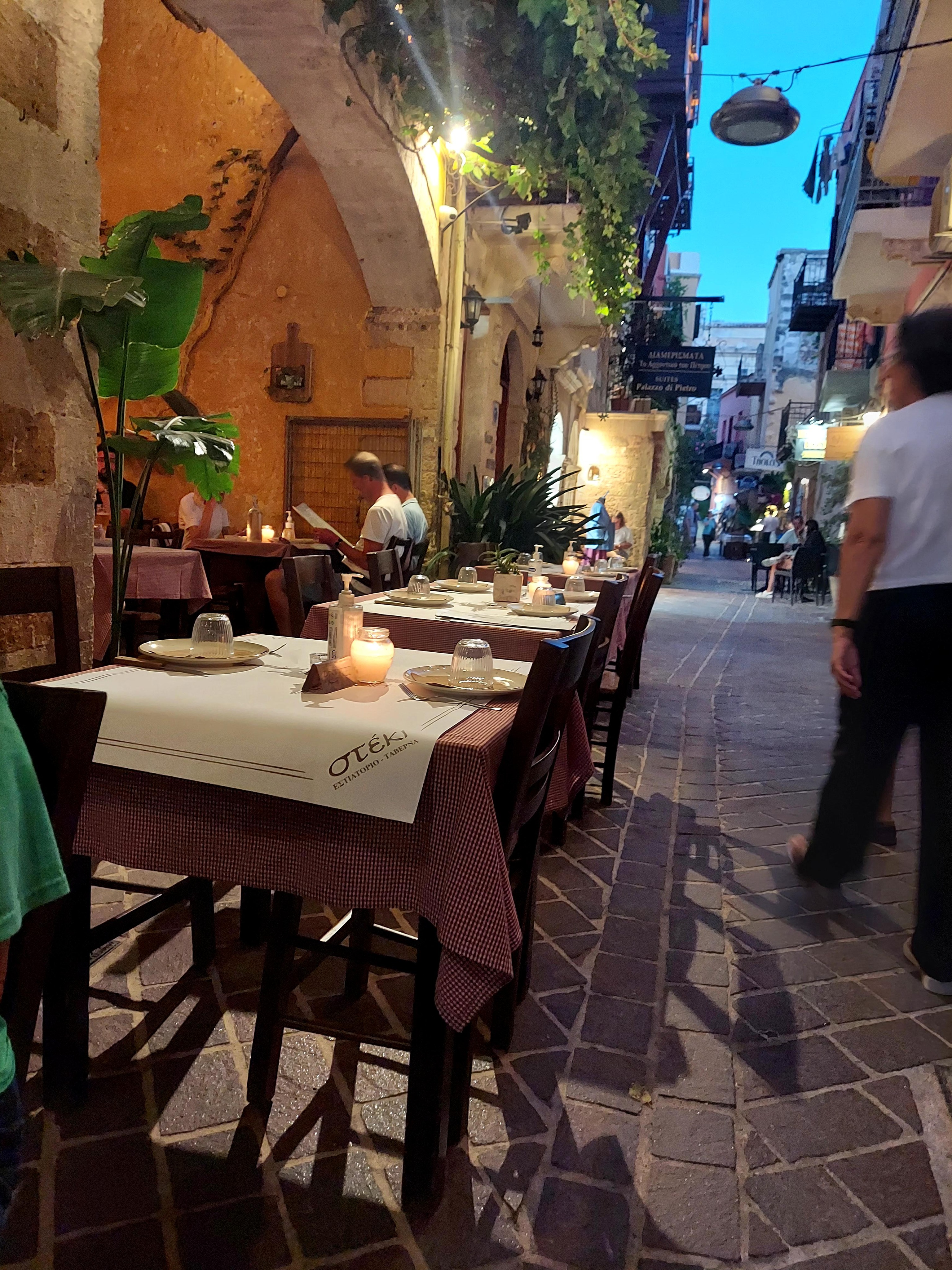 Later you can have a gelato and watch the sun set or moon rise over the harbor. 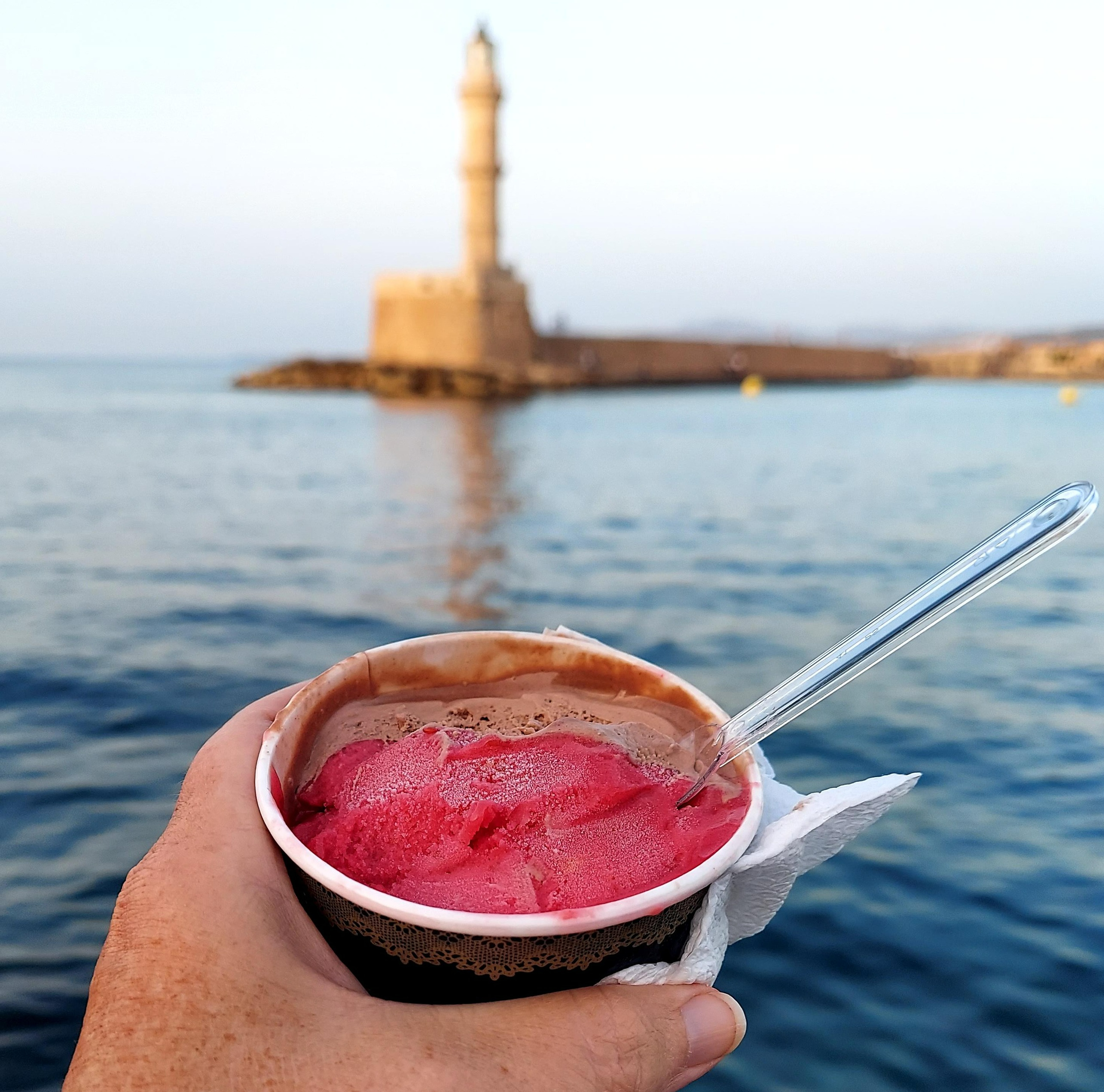 By the way, that’s raspberry and Nutella gelato in the picture. It was really good.

The food was uniformly amazing throughout the trip. In 16 days I did not have one bad or even sub-par meal. Most of the food is grown on Crete, so it’s fresh. Tomatoes and cucumbers taste the way I remember them tasting. The cheese is made fresh from the goats; the olives picked from the olive trees out back. The bread baked in the oven that morning. I must have had at least 9 Greek salads on this trip, and each one was slightly different in makeup. All were delicious. 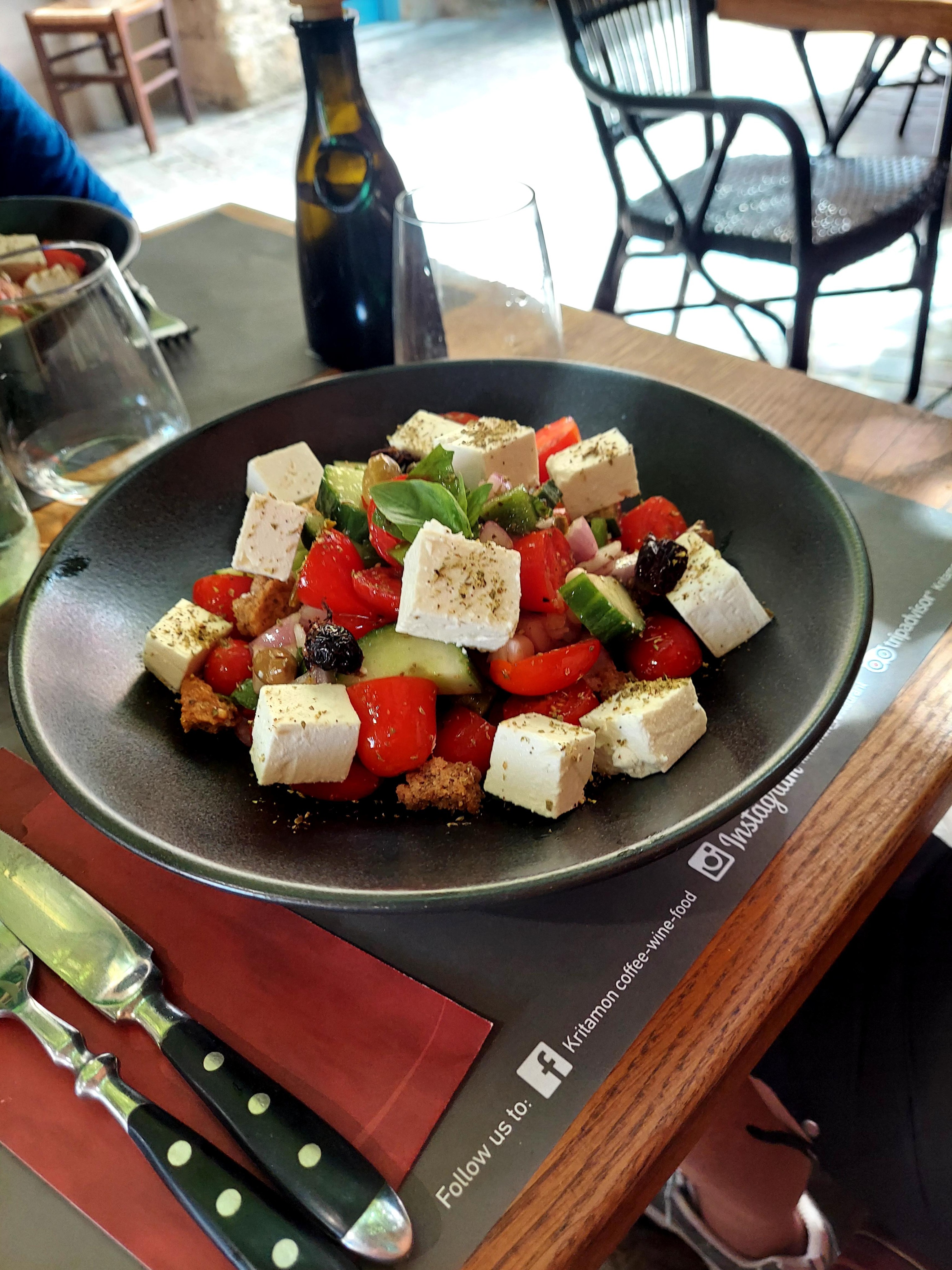 No meal is rushed. You sit, you get beverages, bread and oil and olives. Pick what you want to eat. It eventually comes. You talk, you eat. They bring more beverages. Eventually they bring a little dessert and Raki, a local ouzo-type beverage made from grape seed pressings and shot glasses. That’s on the house. Then they might bring the bill at some point, after you ask for it. No pressure, just hospitality and a fantastic meal. Add in the sound of the ocean hitting the shore, balmy air, and you have a recipe for a perfect place to vacation.

I recommend walking the sea wall to the lighthouse and just losing yourself in the old town streets, you’re sure to see something that interests you. That with sampling different restaurants is good for at least two or three days. Side note. There are stray cats everywhere. 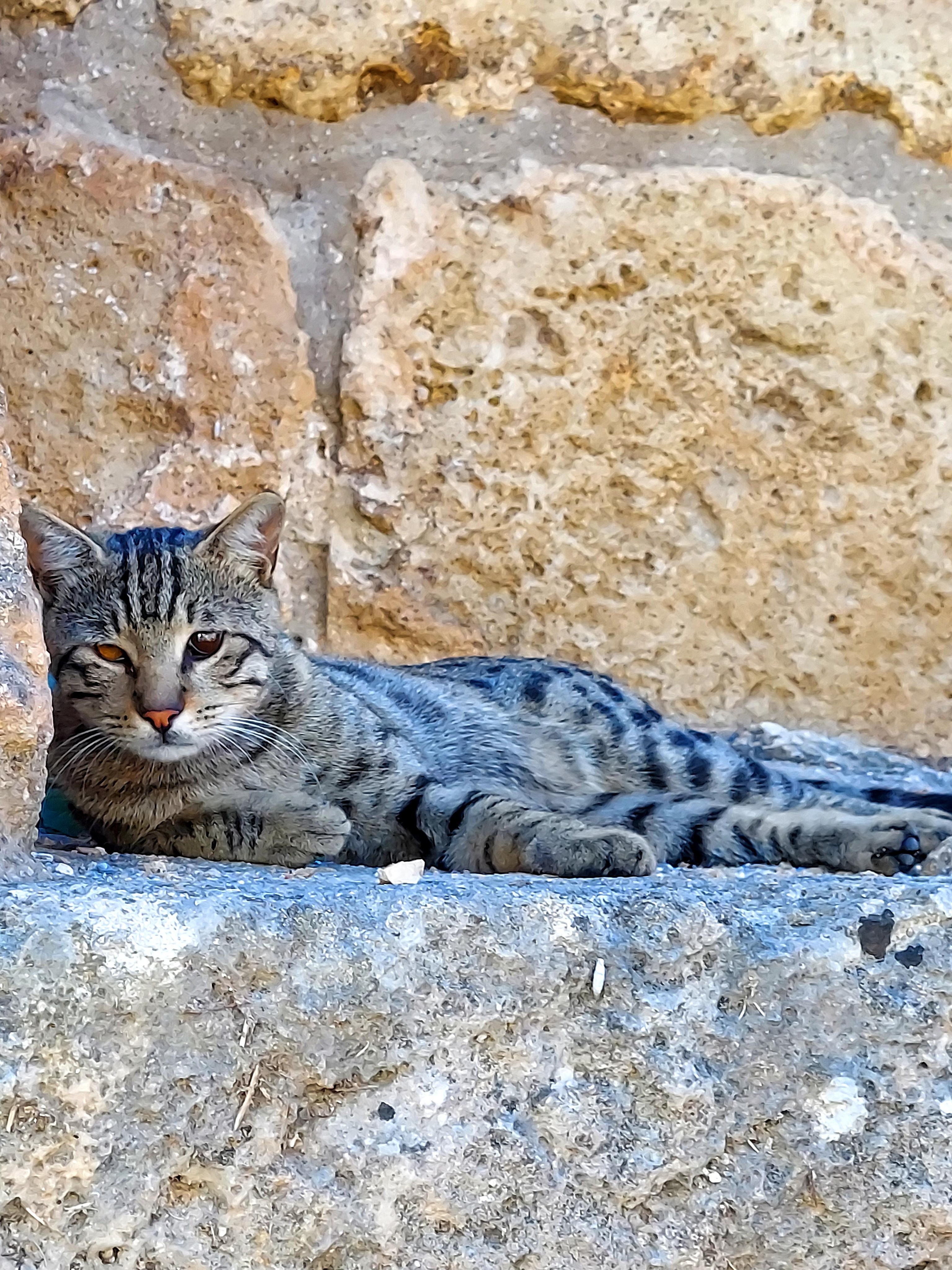 People feed them. This was everywhere on the island. I saw no mice, rats, or squirrels, so seems it’s their way of taking care of the vermin problem.

On the last bit of my vacation, I was on my own in Chania, with no real agenda. I walked over to the local beach and swam for a half hour in the clear waters of the Aegean Sea. Chatted in my bad Greek to shopkeepers, got corrected, and had the most wonderful time connecting with people. I wandered the extensive Byzantium Wall that surrounds the old city. 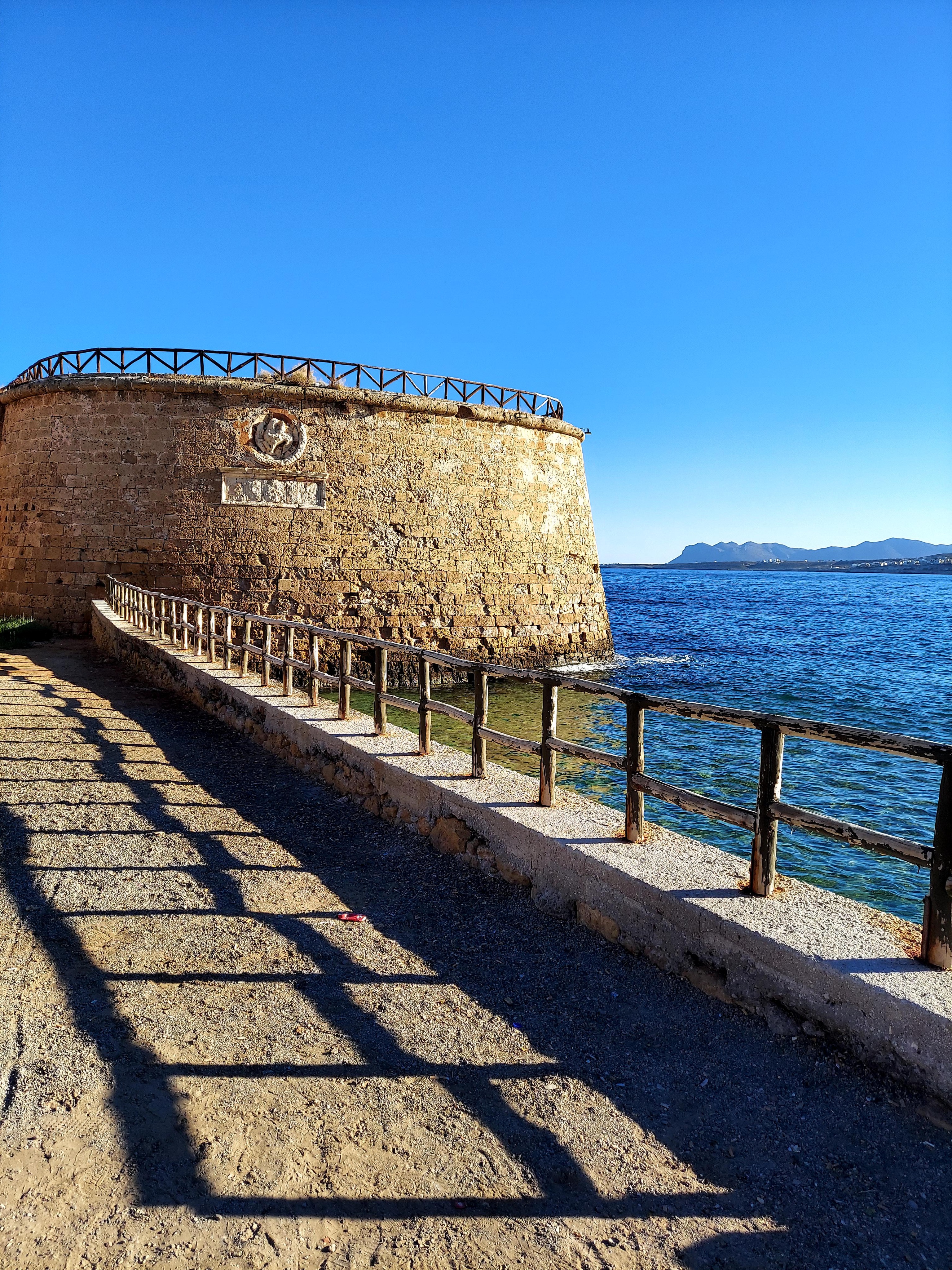 While buying a shirt for one of my sons, I got into a conversation with the owner. She told me that the Chania Archeological museum was walkable from where I was staying, and so I did that the next day. It’s a wonderful, thoughtful museum just outside the heart of the city. The path there lies along the ocean and is a delight. I’ll talk more about this museum in a later installment.

The final thing I will recommend doing in Chania is to go to Al Hammam. It’s an old Turkish bath in yet another restored Venetian home. I’d never done one before. You steam, and then a (woman in my case) bathes you with olive soap and oils, washes your hair, and gives you a back massage. It was an hour and twenty-five minutes from heaven. Being bathed and tended to was never on any list of mine, but I have to say, it is now.

Chania is magical. I hope you get to go there sometime. For reference, I stayed at the close-to-the-bus-station Alena apartments for two nights, and recommend it. Not fancy digs, but comfortable beds, a washing machine, and easy to get around from. Boutique Hotel Doge was fantastic, in the heart of the old town, a converted 14th century home. Lots of stairs, so not for anyone who needs an elevator. Lovely people run both places.